The poet Donald Davie says of Samuel Beckett’s Dublin, in the poem of that name, that “the seasonable or more rabid heats / of love and summer in some other cities / unseal the all too human: not in his.” But Beckett’s Dublin lies a lifetime away from Lanford Wilson’s Dublin, Missouri, the setting of his episodic drama, Book of Days. Here the heat of summer and the passionate intimacy of bodies unseals, threshes, and discards the “all too human” all too readily. In the University of Alabama’s production of Book of Days, directed by Matt Davis, this heat is ever-present, emanating from the skillfully oppressive red lighting, designed by Tiffany Williams, and from the sheer number of bodies on stage at any given time. 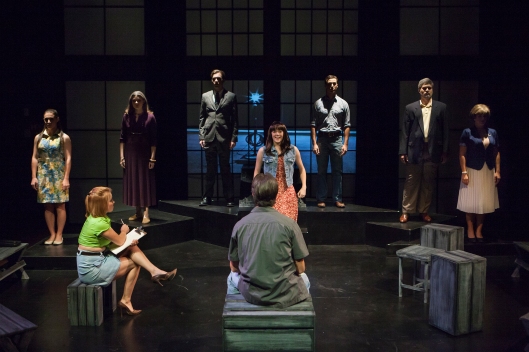 In this Dublin, you can never escape the eyes of your neighbors. This production takes Wilson’s sketch of small-town middle-America and corrals it onto the Allen Bales stage, seldom leaving us with fewer than six actors staring each other down. This constant watching is scarily effective because in this Dublin—just like Beckett’s—a religious divide runs through. You are either with the church here, or you are against it. And the watching is even reflected in the stage design (by Andrew O’Neal), which, in its assortment of wooden benches and boxes, resembles a nineteenth-century camp revival with a cross etched subtly into the backdrop.

Though the play works with stereotypes of small-town, working-class Americans—the preacher, the hunter, the factory-worker-with-dreams, the high-school-sports-star-turned-sour—this production manages to subvert those stereotypes by presenting us with fiercely portrayed humans rather than types. These fierce portrayals start first and foremost with the brilliant and subtle costume design by Emily Mae Billington, which attaches to each character a distinctive and idiosyncratic way of being and moving. For instance, Martha Hoch’s (played by Andrea J. Love) purple dress is particularly effective at evoking a sort of fluidity of character—and Love’s body follows it well.

Indeed, all of the female roles in this production are skillfully enacted. Naomi Prentice demonstrates an enormous range in her characterization of Ginger Reed—from sassy sashaying playgirl to, in a beautifully staged moment of meta-theatrics in which she parrots the role of Sharon (normally played as a fierce Ann-Romney type by Taylor Schafer), a woman watching her life break before her eyes. Alexandra Karr, as Louann Bates—when she is allowed to speak at all—claws her way out of the emotional holes her husband (the cold-blooded James Bates, played by Michael Vine) attempts to bury her in.

But the most impressive presence in this production is Ruth, played by Miranda Rivas.  Rivas’s quiet ability to stare into the middle distance at things the audience can’t see, the small movements of her hands, the way she builds towards the frustration and hauntedness of Joan of Arc (a role that Ruth prepares for during the course of the play) results in a level of bodily control that is highly reminiscent of Cate Blanchett’s recent harrowing performance in Woody Allen’s Blue Jasmine. Rivas’s alignment of her movements with her emotional states is devastating, and though she works with a terrific ensemble, she largely carries the show. She is a presence to be looked for in the coming years.

Miranda Rivas as Ruth Hoch. Photography by Porfirio Solorzano and used by permission.

Which is not to say that the men of Dublin do not do their part. Ruth’s husband, Len (William Rowland), comes off as self-assured in the face of a very palpable domination by Walt and James. Tyler Spindler, as Earl Hill, gives an often understated, but ultimately moving, performance of a man who cannot help but be duped by those around him. Anthony Haselbauer stands out as Walt Bates, a sixty-year-old cheese-mogul; Haselbauer’s commanding physical presence and booming voice help him age just as well as Bates’s cheese. 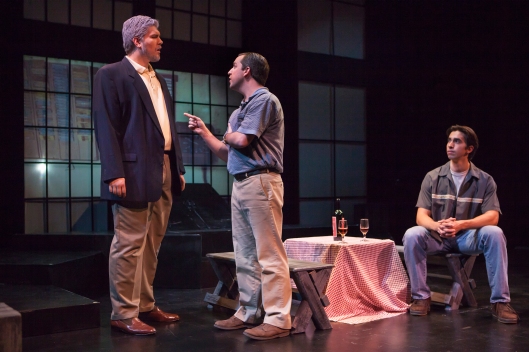 And perhaps that is what this play is ultimately about: aging, fermenting, coming into one’s own. It is a play about production, about morality, about belief, about the inescapability of America’s rolling plains. But it is also—in its own dark and twisted manner—about the younger generation replacing the older one; about the sacrifices this transition demands of both parties; and about the painstaking process we all must go through, once the “all too human” has been “unsealed,” to close the wound, to bind it. And to carry on.

The University of Alabama’s production of Book of Days runs through October 6th. For more information, please visit: http://theatre.ua.edu/productions/current-season/.